Indecision and conflict continues over Confederate street names and statues. 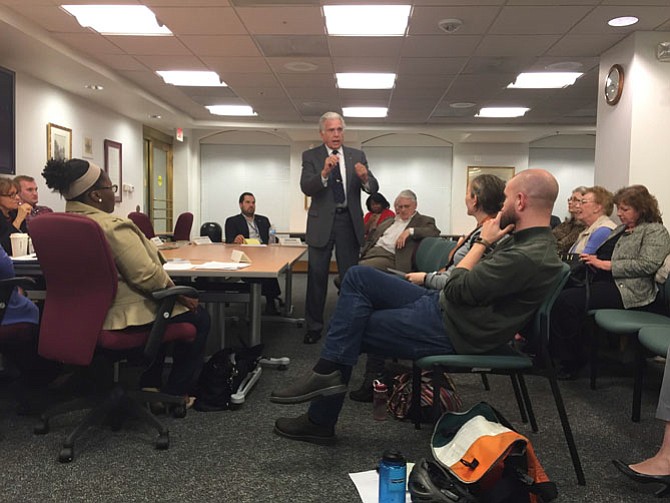 After four tumultuous meetings, the Ad Hoc Advisory Group on Confederate Memorials and Street Names has not managed to settle the 150-year-old conflict over the legacy of the Confederacy in Alexandria.

“It's important to remember our history, good and bad,” began Mary Lyman, chair of the Advisory Group and the Planning Commision, in as neutral a tone as the April 11 meeting in the Sister Cities Conference Room would see. “We’re not trying to forget anything, we’re just trying to figure out how to deal with that in modern times.”

But at its fourth meeting, the Advisory Group showed its own rebellion against the City Council. Eugene Thompson, representing the Society for the Preservation of Black Heritage, said that the City Council handed the problem down to the group before it had even been established whether or not the city could make any changes. The Appomattox statue is protected by the Virginia statute concerning Memorials for War Veterans, which states that removing a memorial to any major war or conflict would be unlawful.

“The city should go to the state asking if they can move it, then figure out if we [should move it],” said Thompson. “Right now, there’s nothing we can do. If it can’t be moved, it can’t be moved.”

City communications director Craig Fifer noted that city charter gives the city power to name streets that supersedes the state level authority, including possibly renaming Jefferson Davis highway. While the topic of changing street names remained hotly contested, most of the group agreed on the highway, which is already broken up into Patrick and Henry streets for most of its route through the city.

“If we were going to change any names, Jefferson Davis would be the one to change,” said Lyman.

For Thompson, the difference between Davis and the other Confederate leaders is that Davis never pledged his allegiance to the United States the way Lee did.

But with over 60 streets in the city potentially named after Confederate leaders (questions swirled around which Lee some buildings or streets were named for), some on the Advisory Group balked at the cost.

“It’s huge and it’s going to cascade,” said Elizabeth McCall, representing the Historic Alexandria Resources Commission. McCall agreed that more needed to be done to honor African American heritage in the city, but argued that “wholesale erasure” of the city’s Confederate past was a slippery slope.

“It is [huge],” agreed Thompson, “but I want us to have that conversation.”

La Donna Sanders added that, as the African Americans in Alexandria are being pushed out by gentrification, the history of African Americans in the city is getting pushed out with them. It didn’t escape the notice of the Advisory Group that many of the streets in the West End named after Confederate leaders, like Beauregard Street, run through traditionally African-American neighborhoods.

As the meeting turned to public comment, old arguments over the causes of the Civil War resurfaced. Speakers were supposed to make their case in general, but some addressed or ridiculed other speakers specifically in a chaotic and tense scene. The meeting adjourned with an agreement to work on a resolution via email — with careful notes on how to avoid Freedom of Information act violations by Fifer — to be presented at an undefined later date.