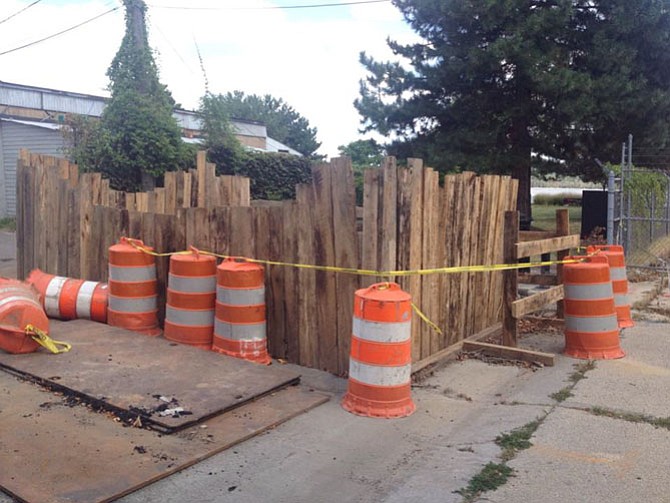 The walled off mosquito pit at the end of Duke Street. Photo by Vernon Miles. 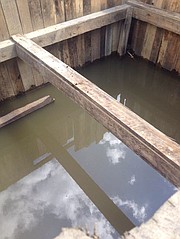 The walled off mosquito pit at the end of Duke Street.

With construction for the Indigo Hotel occurring in the area, it might have been easy to dismiss the pit of standing water at the corner of Duke and The Strand. But Yvonne Weight Callahan had more reason to notice than most. Callahan’s husband Vincent Callahan, a former delegate to the General Assembly, died in September 2014 as a result of a coma brought on by West Nile Virus. West Nile Virus is carried by mosquitoes, the kind that flock to pits of still water as a breeding ground. Callahan raised the issue with one of her neighbors, who in turn contacted the city to have an inspector sent out.

“[We] responded to an inquiry regarding mosquitoes in standing water in the area,” said Daniel Sherwood, an environmental health biologist for the Alexandria Health Department. Sherwood said that Brad Wright, Alexandria Health’s vector borne disease biologist, went out to several sites and identified two potential breeding grounds. One was not inhabited, but Sherwood said the department would continue to monitor the area. But the results from the water at the foot of Duke Street were more distressing.

“[There] was standing water and it was producing mosquitos in large quantities,” said Sherwood. “It’s one of the biggest sites we’ve ever seen. It was a good find and it's easy to control.”

According to Sherwood, there’s no way to test and see if these specific mosquito larvae were carrying viruses, but Sherwood says the Health Department does test adults and has traps established throughout Alexandria.

“We get the results of those and we are constantly internally interpreting that information,” said Sherwood. “This year, we have seen an increase level of viruses in the mosquito population. We are monitoring very closely what’s going on at a local level and regional level. We’re very concerned about potential for increased human cases. We’re trying to stay on top of that surveillance and monitoring viruses.”

Virginia Department of Health reports that there have been four new cases of West Nile in Virginia. According to the Alexandria Health Department website, the black and white Asian Tiger Mosquitos are the most prevalent variety in Alexandria, and while they are capable of carrying diseases like West Nile Virus, they are not very good at transmitting it. Of greater concern are the small, brown Culex mosquitos, which generally feed on birds, but also bite humans and other mammals. Of those infected with West Nile virus, the Alexandria Department of Health says 80 percent will not have any symptoms at all. Those who do, symptoms generally begin showing within three to 15 days after infection. Twenty percent of those infected with West Nile Virus develop a fever and one in 150 infected people will develop serious illnesses.

“There are viruses present throughout Alexandria in the mosquito population, and West Nile virus is an endemic, so we are concerned about that,” said Sherwood. “There is West Nile virus in Alexandria. For the public, they need to be covering up with long-sleeved loose clothing or some type of insect repellant, especially during dusk or dawn, and reporting things that they can’t control, like standing water.”

For most Alexandrians, West Nile isn’t a major concern during the work day. It certainly wasn’t for Callahan, who recalled only vaguely hearing about it before her husband was infected. Callahan recalled maybe seeing a story about someone in Maryland and a woman in D.C. who were infected, but it was a remote problem until it took her husband. Since that time, Callahan says she’s studied a lot about the virus and became more aware of it as a health threat. She says she was very satisfied with the Health Department’s response to the community feedback.

“The Health Department was very responsive. They arrived within just a few hours of the complaint,” said Callahan. “They have continued to be vigilant. The city is very careful about looking for standing pools of water and treating them with larvicide.”

However, Callahan was critical of the National Park Service, which refuses to use any sort of larvicide on standing water in Jones Point Park, and to the contractors that allowed a pool of standing water to remain on their site. In an email to local residents, Emilio Pundavela, a civil engineer for the city, said that the contractor had drained the water out of the pit and would continue to to do so three times each week, sufficient time to keep mosquitos from laying larvae in the pit.