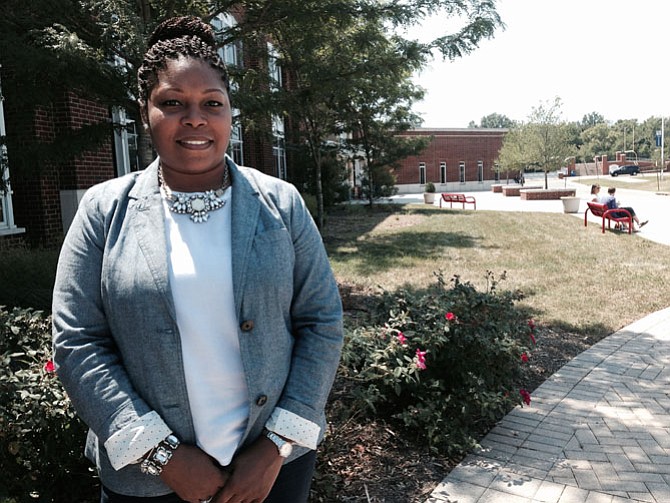 Where is Kennetra Wood, the new academic principal on T.C. Williams’ Minnie Howard campus, from? She laughs: “Well, that’s a hard question. My family moved around a lot.” Born in New Jersey, yet raised in Pittsburgh and South Carolina, ultimately, Wood calls Pittsburgh her hometown. It’s where most of her family resides, and it’s family that’s most influenced Wood’s professional life.

“I come from a very strong educational background.” Wood said. “My aunt was a Department of Defense principal in Germany then in Japan. Another aunt was a teacher and my grandmother worked at McGraw Hill, the textbook publisher. In my childhood, I spent a lot of time in McGraw Hill workbooks. A lot of time.”

It was those women, particularly her aunt in Japan, who helped guide her to educational success. “She pushed me. She even wanted me to go to school overseas, but I didn’t want to leave my friends,” Wood said. In the end, her familial educational influences paid off. That, along with a teacher cadet experience she did in her high school senior year, led her to the classroom.

“It was just in me,” Wood said. “The first time I stepped in a classroom I knew that it was what I’d be doing.”

”Regardless of where we moved. Or what was happening around me. I excelled,” said Wood, when describing her formative educational years. Yet that didn’t make it easy. She was a young Black girl from a poor family. At times she was in classrooms where there were very few students of color. At times it was assumed she couldn’t succeed.

“When we moved to South Carolina, they tried to hold me back a year,” she said. “That didn’t happen.” Other times she was overlooked, underestimated and left without guidance. These types of experiences helped inform Wood’s work. “I didn’t have a real push from anyone in my school,” she said looking back. “Part of why I want to support students period is because I felt like I didn’t have that when I was in school. It was a different time. They also didn’t have as many resources back then.”

Wood earned her BA in English education from South Carolina State and her Master’s in counseling and development from George Mason University and a Master’s in educational leadership from Trinity University. She taught English for seven years in Fairfax County and Prince George’s County, Md.; was a school counselor for four years; a dean at T.C. Williams High School; then, an assistant principal at Minnie Howard for four years.

She’s balanced being a teacher and then a counselor. She recalled being a teacher. She was strict with her students: “In the classroom, your mind belongs to me. Your body belongs to me. They knew in that 90 minutes, I was a tough cookie.” Outside of the classroom, she was different. As a counselor, Wood thrived on the personal relationships she formed with the students. She keeps up with many of her students. “Now I’m going to weddings. I’m going to the hospitals because they’re having babies and I’m going to baby showers. That’s the piece that keeps me going. Being able to see the fruit of the seed you’ve planted.”

She’s been at Minnie Howard for four years as assistant principal and knows she’ll have to find balance in her new position: “I plan to be visible” — which is what she’s done for the past four years. However, this year that will have to be balanced with the new demands of her role as principal. She knows it will be a challenge. “But I’m determined,” she said.

Favorite Movie: No one movie in particular. I love movies. It’s my favorite pastime.

Favorite Book: “To Kill a Mockingbird”

Something surprising about you: I play women’s flag football. I play center. I was introduced to it by one of my students. I’m also a brown belt in Tae Kwon Do.