Beachcomber To Be Rebuilt for Boat Club
Votes

Beachcomber To Be Rebuilt for Boat Club 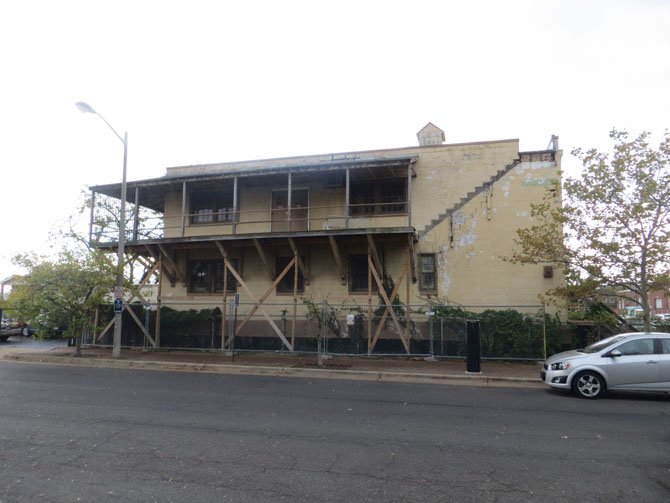 The Beachcomber Restaurant, an abandoned building on the Alexandria Waterfront, will soon be restored as the new home for the Old Dominion Boat Club. Architect Michael Winstanley presented a model and series of blueprints of the new Beachcomber to the Waterfront Commission at its Oct 21 meeting in City Hall. The renovations would keep the original design of the building, but new external layers and internal features pay homage to the building’s heritage on the Potomac River’s shore.

the artist’s rendering of the redesign.

The Beachcomber sits at the end of Prince Street, across Strand Street from Big Wheel Bikes. Built in 1945, the Beachcomber was once a seafood restaurant that jutted out into the water. The site was bought by the city in 2006, but the building has been abandoned since that time and fell into a deeper state of disrepair.

According to Winstanley, the core of the design emulates the piers and the working waterfront. The objective was to honor the history of the Beachcomber while maintaining functionality as a boat club.

“We’ve integrated the design of the Beachcomber building and picked up the aesthetic of the existing piers,” said Winstanley. “We’ve kept the utilitarian base that is typical of boat typologies.”

But while the architects were happy with the design, and it was approved by the Board of Architectural Review, there were still sentiments that the building focused on the Beachcomber and waterfront legacies but neglected the history of the Old Dominion Boat Club.

The building’s design was not met with universal approval by the Waterfront Commission. Councilman Paul Smedberg expressed what he believed would be concerns from the community.

“My experience has been, if this were presented … the first thing out of people’s mouths would be ‘this has no connection to Old Town and its history and the warehouses,’” Smedberg said. “One might say it’s modern, or contemporary.”

“Boathouses are built to a contemporary period to where it is established, historically,” answered Winstanley. “We think that tying the boat club to the act of boat building is tying it into the history.”

“I’m actually talking about the look of it,” Smedberg continued.

“So am I,” Winstanley retorted. “We think this is a chance for the boat club to establish itself as an important identity in Old Town.”

Townsend Van Fleet, president of the Old Town Civic Association, stressed the need for the development on this project to be sequenced with the other construction in Old Town to avoid closing off all of the streets in Old Town. Van Fleet also called on Al Cox, historic preservation manager and architect for the Department of Planning and Zoning, to give his opinion on the project.

“The Board of Architectural Review … was fairly effusive in their appreciation of this form and the evolution of the boat club in its third location,” said Cox.

Winstanley noted that the design process had faced several complications. The clubhouse requires 45 parking spaces without interfering in the process of moving boats into the water. A jib crane, an arm that lifts and moves boats into and out of the water, was considered as an option to replace the boat ramp. Ultimately, a design was found that allowed club members to park while leaving a free lane for boats to be brought to the water. The building also had to be raised to 14 feet above sea-level to meet FEMA flooding regulations. The regulation allows for a lobby and storage space on the first floor, but the primary usable areas of the boat club are on the second two floors.

The new boat club building also had to integrate with the city’s plans for the waterfront redevelopment.

“We have the added burden of designing a structure [the city] is going to build around later, and that’s a little complicated for us as well,” said Winstanley. “The whole idea is to provide a lot of activity along the waterfront but to step it back so it’s not directly on top of it.”

In spite of these restrictions, Winstanley says everything in the building’s design will be within the existing codes.

“Building will be designed according to zoning,” said Winstanley. “We will not be asking for any exceptions.”