Working toward English Literacy in Alexandria 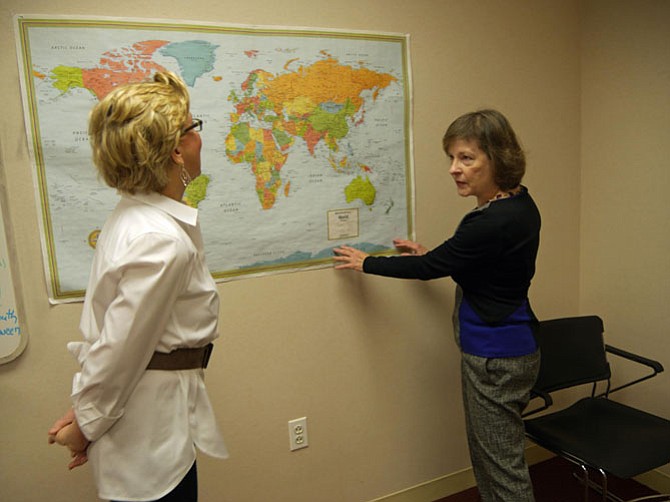 "Good morning ladies." Marcia D'Arcangelo stands in the large central room greeting teachers and students as they walk by, headed for their English classes. She is director of the New Neighbor ELL program in Alexandria funded by the Campagna Center.

Marcia D’Arcangelo, director of the New Neighbor ELL program funded by the Campagna Center, stops in to visit the four-year-old group which is working on recognition of letters.

"We have nine different levels here. We recently added a new entry level of literacy when we discovered some people didn't know the basics of the English language, like the alphabet," D'Arcangelo said.

An advanced beginning class begins the morning by discussing their homework .

D'Arcangelo says the classes range from "cradle to grave" beginning with 18-month olds, 3 and 4 year olds and adult classes. She says, "A lot of people come from other countries where they are not used to being separated from their young children so this is perfect. The parents can attend the adult classes while the children are learning just down the hall." She adds that most of the adults used to come from Latin American countries but now it is about one-third Latin American, one-third Middle Eastern and one-third a mixture of everything else. "We have students from all the continents except Antarctica. Those penguins just can't get with the program." This year there are 161 adult students from 38 countries speaking 22 different languages.

D’Arcangelo pops into the four-year-old class. Weona Chambers has been teaching since 2000 and explains she just got her GED. Chambers leans down to the table, "Now here is your name Jeniece — just trace over the dots."

D'Arcangelo reaches over a tiny head to a table scattered with letters. "Can you find this letter?” she asks.

Mai Noor, who teaches the babies' English class at the New Neighbor’s ELL program, begins with a daily routine and simple American words.

The class is working on alphabet recognition. In the baby room upstairs, the children are sprawled on the floor in front of a two-foot book with the picture of a car. Mai Noor, who teaches the babies, came here from Sudan. She starts with a routine and simple words so the children get used to hearing English.

D'Arcangelo enters the Level 4 class to a discussion of Thanksgiving. In English, of course, "we always speak English to the children and their parents although we can translate if needed." The instructor, Paula Tosini, asks if they have a holiday like Thanksgiving in their countries — from Bolivia to Japan. All nod "no," but they are all celebrating the American holiday. Tosini wonders if they are serving a traditional meal. Faces wrinkle with the struggle to find the right words. Gabriel says they are having rice and tortillas, salad and stuffing and a pumpkin pie. "I am doing the cooking." And the room laughs with him.

Weona Chambers, teacher of the four-year-old class, works with Jeniece on tracing her name by connecting the dots.

D'Arcangelo says, "We have a community here among the teachers and the students. We help with social services and immigration issues, too."

The advanced level class is waiting to begin. Patricia DePuy points to a map and says, "We have students from all over the world. Every year there is a country you've never heard of." She said some of the countries are in conflict with each other so she tiptoes around issues and just lets the students decide what to discuss. DePuy added, "This is like a little United Nations." The program runs from 9:30-noon Monday, Wednesday and Friday and is held in Christ Church's Fowler house on Columbus Street where space is donated. The cost for adults is $120 per semester and $125 for children with a semester running similar to the school calendar.

The scope of D'Arcangelo's responsibilities extends from hiring, budget, curriculum, awareness, teacher orientation, to publishing a newsletter and coordination with other program directors at the Campagna Center. "There is so much that goes on behind the scenes to make this program a success." Previously she spent 23 years in the education field with teacher training and development. Later she started as a volunteer with Campagna Center, gradually assuming this position. Along the way she did other things. "I won't tell you, well, OK. I was a dancer with the Perry Como traveling show for 12 years." But she says the importance of education was a tradition in her family. "My grandfather came over at 12 years old as an Italian immigrant. He was plunged into the system with no support. It's something that has been emphasized my whole life and I wanted to be a part of making it better for other people in the same position. What we do here is wonderful."