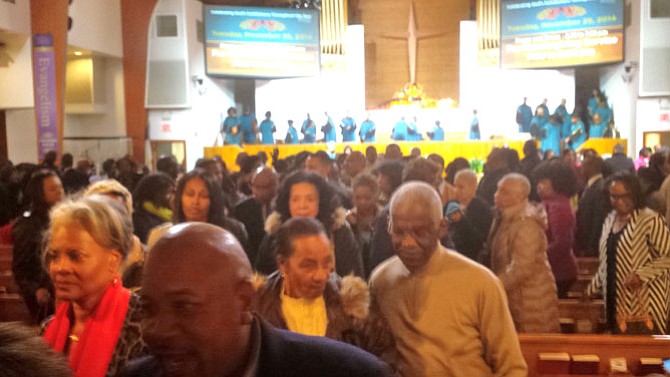 The vigil was held in the wake of the recent announcement that the Ferguson grand jury would not indict Wilson for his actions. Hundreds gathered in the sanctuary to spend time in prayer for the family and friends of Michael Brown and to hear an encouraging word, especially since it was two days before the Thanksgiving holiday.

“Thanksgiving is not just a day, but a decision to bless the Lord with everything, despite your situation and circumstance,” said the Rev. Dr. Howard-John Wesley, addressing the question of how the congregation might give thanks with a heavy heart. And while he provided an answer to that question, he discussed the inequality that continues to plague the American justice system.

“Race still matters in America,” said Wesley, echoing the sentiments of many across the nation. A chorus of “amens” rang out from the congregation as he said there are still too many reports of blacks being killed by police. He called out members of the black community, saying that there is not enough love for each other among themselves. The violence taking place in Ferguson was an example of this, as buildings, some minority-owned, were being destroyed.

His sermon focused on the Book of Habakkuk, the eighth of the 12 minor prophets of the Hebrew Bible.

“This book has the words of a man who is angry with God,” preached Wesley. “He is living in a land where people are treated unjustly, and he wrestles with what it means to worship a God who is just, while living in a nation that is unjust.”

But rather than become discouraged and despaired in the face of injustice, the congregation was encouraged to speak out against the injustice and to maintain faith and hope.