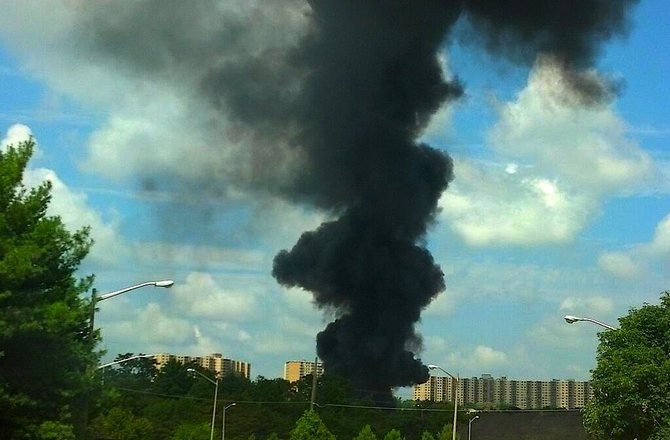 Heavy plumes of thick black smoke can be seen for miles. Photo courtesy of Diane Cullo

Firefighters from across Northern Virginia and Maryland are battling a massive, six-alarm fire at 801 South Pickett Street, a warehouse building tax records say was originally constructed in 1965. City records say the building is owned by McLean-based Velsor Properties, although a spokesman for the Alexandria Fire Department said he was not yet sure what was inside the building.

The 911 call came at 11:49 a.m., reporting a fire at a warehouse. The business was closed for Labor Day , so nobody was in the building when the fire began. When first-responders arrived, they discovered heavy fire and smoke. But as they started their interior attack, responders realized this was going to be a massive undertaking.

"Shortly after entering the building, they had a partial collapse of the roof and they also noticed an interior wall that was beginning to buckle," said Chief Fire Marshal Robert Rodriguez. "We also had a water main break that caused a problem, but we have since worked around that and found other hydrants that were unaffected by the water main break and we are working from those."

As late as 2 p.m., Rodriguez said the blaze was five-alarm fire and said that the situation was not under control. Firefighters are not yet sure what's burning inside, although a sign on the outside of the building says it is a construction and recycling business.

No injuries have been reported. Thick, dark smoke from the fire can be seen for miles. Firefighters are trying to contain the fire, but Rodriguez says that's "proving difficult."