Three elementary schools to be demolished; one new school at a site to be determined. 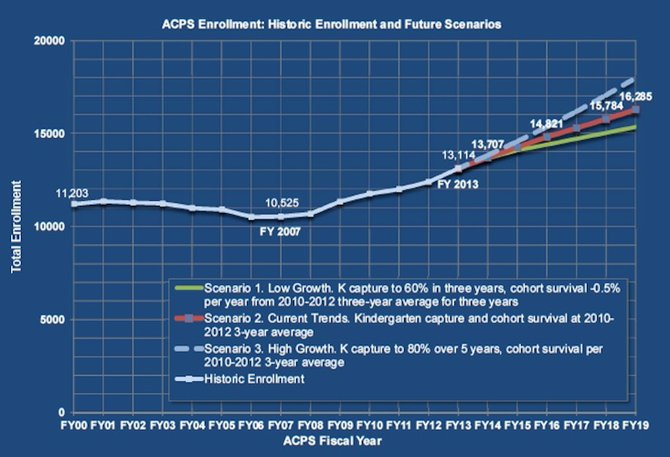 Over the course of the next decade, Alexandria school superintendent Morton Sherman wants to spend $357 million in an ambitious plan of demolition and construction - replacing existing facilities with new buildings and adding a new school. Three existing schools would be leveled and rebuilt, and one new school would be added at a location yet to be determined. Last month, Sherman proposed a Capital Improvement Program budget to School Board members that would more than double last year's city appropriation, setting the stage for weeks of public debate about the future of Alexandria's schools.

“Are we going to go in and antagonize City Council from the get go?” asked School Board member Pat Hennig. “We have no business going to the funding authority without being able to prove every single thing we say.”

The superintendent's $357 million capital request is $212 million more than the Capital Improvement Program budget City Council approved last year, which was $145 million. That could mean a pitched battle in the coming weeks as school officials and city leaders clash over what kind of spending is appropriate for the school system in the coming decade. For now, Sherman must persuade School Board members that doubling the capital budget is justified.

“I'm certainly not in a position right now where I could say I could vote for it,” said School Board member Bill Campbell. “I need to see a lot more justification to make the kind of changes being proposed.”

THE DEBATE ABOUT the future of the school system comes at a time when administrators are still trying to recover from last year, when an independent accountant declared the budget office operated in a “dysfunctional environment.” City Council members cut the School Board's Capital Improvement Program budget in half, and Sherman installed a new group of budget officials. Now senior administration officials say strict guidelines are in place for documenting procurement.

“It all seems pretty standard,” said Tammy Ignacio, chief administrative officer. “I can't tell you why it wasn't done before.”

The first new facility will be at Jefferson-Houston, the long-troubled elementary school that has now been transformed into Alexandria's first Kindergarten through eighth grade educational institution. Construction will begin this summer, and demolition of the existing building will take place after the new facility has opened its doors next fall. Last year, members of the Alexandria City Council approved the $43 million project, although many neighbors in the Parker Gray neighborhood questioned the scale of the project considering the school system is planning a new school at a location yet to be determined.

“We will be working with the city to give you a recommendation as to what that site might be,” Sherman told School Board members last month.

“I can't sit here now and say in the abstract what line items I am or am not comfortable with,” said School Board member Justin Keating. “That's just not the way the process works.”

ENROLLMENT PROJECTIONS from the school system show classrooms bursting at the seams, and school administrators scrambling to meet an ever-increasing demand. In the last six years, Alexandria City Public Schools has increased 30 percent. Over the next six years, enrollment projections show, enrollment figures will increase 3.7 percent each year - adding thousands of new students to the school system. Within five years, senior administration leaders say, the school system will also need to address capacity issues at middle schools and even the $100 million new T.C. Williams High School.

“As we continue success with dropout and on-time graduation rates, additional high school capacity needs will occur,” according to Sherman's proposal.

“I don't want to spend a penny more on this room,” Sherman told School Board members when he presented his proposed budget last month. “In fact, I'd be happy if I could take you out to all the schools and have board meetings across the community.”