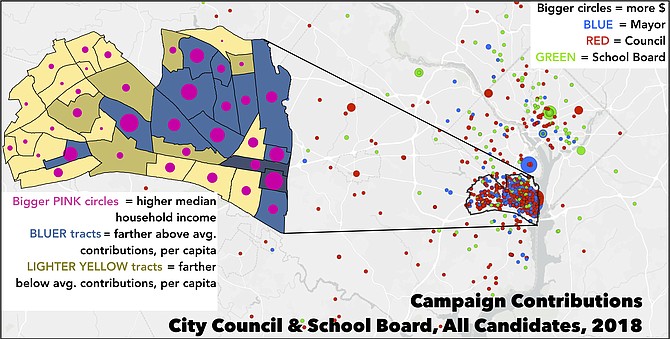 Campaign Finance: Between 2017 and 2018, individuals and organizations outside of Alexandria supplied 41 percent of campaign contributions to City Council and School Board candidates. That’s including “direct” monetary contributions and “in kind” contributions of products or services (e.g., a restaurant donates food to a campaign event), but excluding candidate self-financing and loans. Of 19 single contributions to any Council or School Board candidate of $5,000 or more, only eight came from within Alexandria. Though not pictured here, state politics showcases the influence of outside money even more. The five sitting state delegates and senators whose districts overlap Alexandria received anywhere between 54-98 percent of campaign contributions from outside their districts, and 13-22 percent from outside Virginia. That’s in aggregate since 2012 (or since the first year the candidate ran, if after 2012), excluding small cash contributions, for which campaign finance reports don’t record addresses. For 2018 local races, higher giving corresponded somewhat with higher income and homeownership, though not without exception. Sources: Virginia Department of Elections, Esri, City of Alexandria, file format conversions via conversiontools.io in accordance with terms of use.