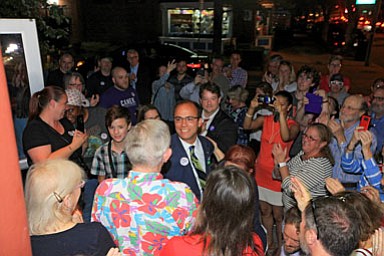 Meet the next Mayor of Alexandria: Vice Mayor Justin Wilson, photographed here greeting supporters at Pork Barrel BBQ in Del Ray after officially being declared the Democratic primary winner over his opponent, incumbent Mayor Allison Silberberg, June 12. The mayorship has been held by a Democrat for decades, and the primary win is tantamount to a general election win in November.

This kind of meeting is good because in this way they can meet the people and especially their supporters as well. In all democratic countries held such meetings or events where people come to meet their leaders and ask questions as well. However, I want to get reviews of https://www.aussiewritingreviews.com/...">https://www.aussiewritingreviews.com/... but this will be good for the students to explore that site.