f Alexandria: ‘The Good, the Bad, and the Ugly’ of Ramsey Redevelopment
Votes

Alexandria: ‘The Good, the Bad, and the Ugly’ of Ramsey Redevelopment 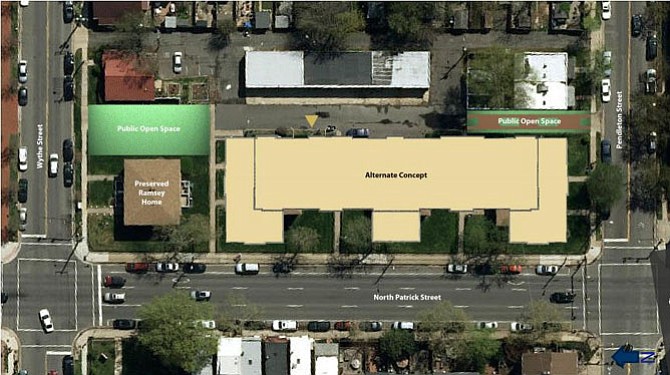 Three of Alexandria’s top priorities are historic preservation, open space, and affordable housing. At the June 28 City Council meeting, a decision over the future of Ramsey Homes found these interests, and the council, pitted against each other. 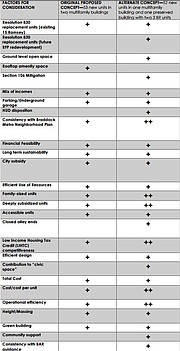 City’s evaluation of benefits for each site

"We’ve always known it was three things pitted against each other: open space, preservation, housing.”

The original proposal was to construct two buildings on the site, offering mixed income housing and 53 affordable units. The proposal was unpopular when it went to City Council in March and was still unpopular at Tuesday’s meeting. The alternative proposal was to consolidate the new affordable housing unit into one building and leave one of the original Ramsey homes intact. However, as the City Council discussed the project, a third alternative emerged: keeping the consolidated one-building proposal but demolishing the preserved home to offer more open space at the site.

During the discussion, the majority of the City Council showed preference for the consolidated one-building design over the original proposal, but differed over preserving the building or clearing it to create more open space.

“We’re still committed to historic preservation,” said Mayor Allison Silberberg. “I see that you came back with options. If we can save [the building], great, but if not, [can we] make it open space?”

The suggestion seemed to surprise staff, given that the alternative was proposed following discussion in May over council efforts to find a way to save the building. In the end, City Council was unanimously in favor of the alternative proposal with the removal of the historic structure.

“This surprised me,” said Vice Mayor Justin Wilson. “This is not what we expected, and that’s fine. The work group was tasked at looking at preservation alternatives. This is a different trade off. We’ve always known it was three things pitted against each other: open space, preservation, housing. We’re going to be able to pick two. What I’m hearing is we want to prioritize housing and open space, and I’m OK with that. We weren’t going to be able to get these all on the site.”

In terms of cost, the consolidated building is nearly $1 million cheaper. The original proposed building would have cost $18,035,204 while the new proposal costs $17,269,045. During discussions with the affected residents, Helen McIlvane, director of Housing, said the alternative proposal was the most popular.

If kept, McIlvane indicated that the city had been looking at non-residential options for the preserved building; particularly as a daycare or child care center. The facility would be able to handle up to 40 children, with an annual operation cost of $15,000 per child.

On the council, there was some question over whether or not the historic preservation of segregated housing was necessary.

“Grew up on a farm, I walked past crosses burning. If you did a survey, I don’t think [African American residents] would care at all about keeping something around that would remind them how they were treated in the past,” said Councilman Willie Bailey, adding that he wasn’t too keen on using the lot as open space either, instead hoping there would be a way to add more open space. “I’ve got one of the best rec centers across the street, that’s where I want to take my kids. I’m not worried about open space .… We constantly talk history, history, history. We need to find more affordable housing. With all the affordable we’ve lost, the historical is trumping the affordable.”

Others on the council argued there was value to either preservation or open space at the site.

“Sad as the occasion may be for why they were built, it’s still part of our history: the good, the bad, and the ugly,” said Councilwoman Redella “Del” Pepper.

“I understand what you’re saying about open space,” said Silberberg, “but I think it’s important … for quality of life. I love the Charles Houston Recreation Center, but this will provide more open space .... To me, that’s an important quality of life issue for the people in this building.”

As city staff and the Alexandria Redevelopment and Housing Authority move forward with a design that converts an existing Ramsey building to open space, other questions linger about the site’s future. As the site is being redeveloped, the city code would require the utilities on the street to be undergrounded. McIlvane said the city is continuing to look at utility undergrounding, but some on the council had doubts.

“Financially, undergrounding is not going to happen,” said Councilman Paul Smedberg. “$700,000 to underground half a block of wires? Let’s get real. Is that the best use of that money? In terms of affordable housing, probably not.”

But Pepper noted it would be hypocritical of the city to require developers to underground utilities for a development but not do it when the city was building.

“We require that of every other development. We can’t just say ‘oh, but not for us,’” said Pepper. “[And] the wires, where they exist, are ugly as sin.”

Ultimately, Pepper supported clearing the Ramsey home to add open space to the site, especially if the home wound up being renovated for residential use rather than used as a daycare.

“I wonder if people, living in these renovated apartments next to new developments, would feel like second-class citizens,” said Pepper. “I would like to preserve [the building], but if it can’t be used for nursery or office and is to be used for residential, that brings up this issue for me, and it is very hard to resolve that.”

Following City Council’s choice, the consultant team on the project will begin work on the preferred concept. The Parker Gray Board of Architectural Review will hold a work session in July on the subject, and the Planning Commission and City Council will review the development special use permit for the site in December.