Separate But Equal Amenities for Alexandria 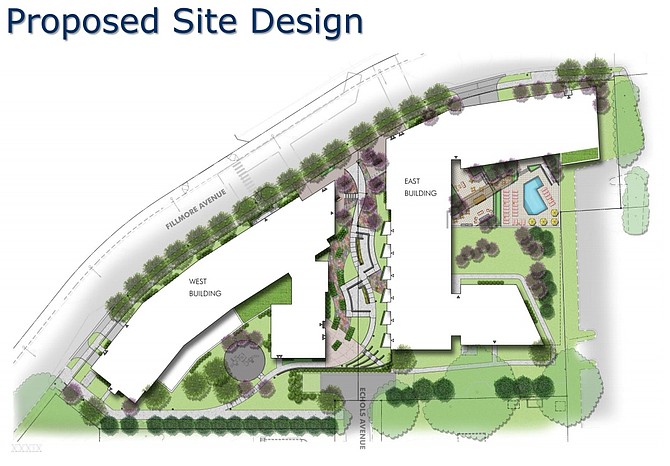 The two housing complexes of The Filmore, proposed by AHC Inc. along Echols Avenue at the Jan. 24 City Council public hearing, seemed alike in almost every way. The East Building would contain market rate housing, and the West Building would contain affordable housing, but the two complexes would share a public courtyard, a playground, and a day-care center. In other words, an ideal housing project that would bring 93 additional units of affordable housing to Alexandria, and the council seemed ready to vote in favor of an amendment to the Alexandria West Small Area Plan to include the project and a special use permit for the site when Councilman John Chapman asked for a quick clarification on one of the apartment amenities.

“Is the [pool] going to be accessible to everyone?” Chapman asked.

“It would be for the market rate housing only,” answered Duncan Blair, an attorney from Land, Carroll & Blair representing AHC, Inc. “When we look at the market rate building, it is subsidizing the affordable building, so it needs to be successful itself .… It’s unfortunate that the amenities aren’t shared, but from an operational and financing standpoint the model is that they will be separate.”

There was a short silence before the City Council responded almost universally in alarm. While each of the council members expressed their support for the added 93 added units of affordable housing, they also expressed grave concerns about the precedent.

"You want to share certain amenities but not others. It’s not just haves and have-nots, it’s separate but equal, and that’s going down a road I can’t [support].”

“What you’re setting up here is going to be pretty divisive, I would think,” said Councilwoman Del Pepper. “I don’t see it working out. It would be awfully nice if the market rate housing could share that pool.”

Members of City Council expressed concerns that the city financing would be helping to pay for a housing project that would be specifically segregating classes. Much of the financing the project will come from a $5.7 million city loan.

Euille initially proposed incorporating another pool into the building for the affordable housing unit, but Alexandria Director of Housing Helen McIlvaine said there would be no room or financing to build, maintain, or pay for an additional pool. Most of the conversation, however, focused around allowing the East Building residents access to the West Building Only pool. According to Blair, however, if the affordable housing residents couldn’t help pay for the pool they shouldn’t be given equal access.

“When you’re looking at sharing, that means sharing responsibility,” said Blair. “Within the financing structure, the affordable unit can’t afford to participate in the ongoing maintenance on the other side … We’ll continue to look, but we can’t make a statement on that today.”

Following a comment from Blair that there would be “issues” with allowing the East Building residents access to the pool, Chapman responded that these “issues” were not insurmountable.

“There’s no issue with the playground; that’s a shared resource,” said Chapman. “The bigger issue is something we’ve seen in the news: we have developments with mixed use housing where folks are treated differently. We want to make sure there’s full equity there.”

Blair’s insistence that there could be liability issues also seemed to ring hollow for City Council members.

“Whether it’s a waiver or a pass, there’s a way to get past the [liability issues],” said Chapman. “The sharing of amenities is a very small thing, in terms of everything else you guys are putting into this, and we don’t want to spoil that.”

“There are ways to have a pass and waive one’s liability concerns, we do that all the time at various pools,” said Vice Mayor Allison Silberberg. “I think it would be better relations across both buildings if you shared amenities. Just have people sign a waiver, it’s not that complicated. There aren’t that many people, between these two buildings, that a pool can’t sustain [their numbers].”

Blair answered that the pool wouldn’t be large enough for both complexes.

“This is not an Olympic size pool, it’s a four-foot pool,” said Blair. “It is not a country club swimming pool; it is a very small pool for laps.”

Silberberg asked for the dimensions of the pool.

“Forty by 60? And that’s not considered a large pool?” Silberberg asked. When Blair answered with the four-foot depth again, Silberberg responded, “It has nothing to do with the depth. With all due respect, that’s a pretty large pool … that could accommodate both buildings just fine. You want to share certain amenities but not others. It’s not just haves and have-nots, it’s separate but equal, and that’s going down a road I can’t [support].”

Pepper expressed concerns that the separation of the pools would reinforce classism at a very young age.

“Even if it’s just four-feet deep, it’s water. Kids are going to see other kids in it, even if all they’re doing is dogpaddling, but they’re going to want it,” said Pepper. “You have to share. Whatever language gets crafted here, it can’t just be ‘yeah, we’ll make an effort’,” Pepper added a heavy note of sarcasm to the last comment, “it has to be a very serious effort, and I’d surely like to hear what comes of this if we pass it.”

Euille agreed that, while he liked the project, the have vs have-not aspect was troubling. He also expressed concerns that the presentation the AHC had initially given on the project was outdated and didn’t contain the information about the pool’s exclusivity.

In the final statements on the issue, Chapman disclosed that the pool issue struck a very personal note for him.

“I grew up in a mixed use development, and everyone had access to one pool,” said Chapman. “I made friends with kids on totally different economic levels. It’s a great opportunity to bring that community together. This should have been a very common sense piece to this. It should have been something taken into account. While I want to support this project, if it comes back that we’ve given public money to perpetuate inequality between the folks in our community, that’s going to be a problem. I can’t vote for this until there’s some clarity in where this is going.”

In response to the criticisms, McIlvaine noted that the likely outcome of the review will be the removal of the pool entirely, which Blair said the developers had already been considering given the $70,000 annual cost of maintaining pools at their other locations.

In an amendment to the approval of the plan change and the special use permit, the City Council requested that staff and the applicant work together to try and find a way to make the pool a shared resource and to present their findings to the council before the project received the city loan. With the amendment, the plan change and special use permit was passed with a vote of five in favor and two, Chapman and Silberberg, abstaining.